The earliest known ancestor, referred to as EKA, on a genealogical pedigree chart is the ancestor with whom all of your matches and you can trace back to in that direct line. You may not know their names but they exist. They have to, they had parents. But for us they are the last one for names in our pedigree list that everyone can connect to.

Mags Gaulden explains, “Finding a DNA match who knows their family history can tell you about your family history.”  Finding an earliest known ancestor, shared between multiple matches, helps to confirm the genealogical paper trail.

The list below is an alphabetical listing of countries,within their regions, of user reported EKA’s for the DNA kits we have in our database. There are some countries that are defined as being located in two geographic areas such as Russia which is located in both Asia and Europe. It is included in both areas below because there are Earliest Known Ancestors from both the east side and the west side of Russia.

Knowing that mitoYDNA.org has EKAs from all of these countries speaks to the international DNA testers who are uploading to mitoYDNA.org. Jump in and upload your mitochondrial and Y DNA and add to the list of international EKAs in this community based growing database.

How Does Your DNA Compare With Famous People?

Written by Peter Roberts Now you can quickly see how your Y-DNA or mtDNA stacks up against Emperor Nicholas ,   Queen Victoria’s maternal granddaughter,  Princess Alix ,  King Richard III , King Louis XVIII ,  or  King Béla III of Hungary . Simply register at mitoYDNA.org  and then upload your mtDNA and/or Y-DNA to mitoYDNA.org.   Then enter your mitochondrial or Y DNA ID in the Famous field. Y Results  Mitochondrial Results As you can see I'm not even close! mitoYDNA is a free Y chromosome and mitochondrial database which allows you to find matches and make comparisons between different DNA testing labs. Here are upload Instructions for Y-DNA   and mtDNA  from Family Tree DNA (the most popular Y-DNA and mtDNA testing lab).    mitoYDNA also accepts Y-DNA and mtDNA results from other labs such as: YSEQ ,  Genebase ,  African Ancestry ,  Yoogene  or from defunct labs:  Gene Tree ,  DNA Heritage ,  Relative Genetics ,  SMGF ,  Ancestry ,  EthnoAncestry ,  Oxford Ancestors ,  Paterni 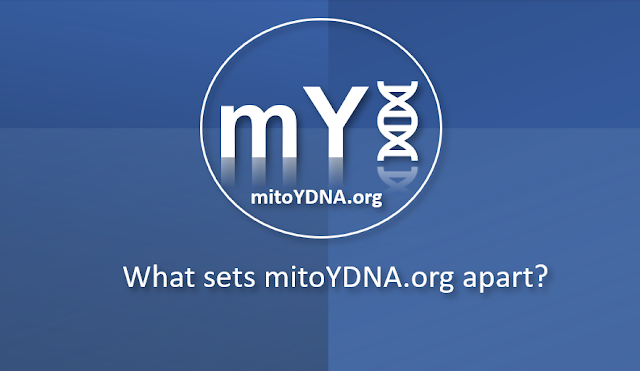 What sets mitoYDNA apart from other DNA Databases? - Mags Gaulden, Team Member, January 1, 2021 I jumped into Genetic Genealogy to solve a family mystery, like so many of us. The very first test I did was a mtDNA test. I did it to see if my grandmother really was connected to the family she reconnected with after living for many years in a children's "home". The mtDNA work I did on the line, using the testing company database and a secondary database (available at the time), helped in major ways toward solving the mystery. My Father is "all in" for my family research and tested next, doing a YDNA test. There are really no mysteries in my father's line, though I did make a discovery - a big one. My Surname is a derivative of the surname Gaulding. I discovered this not on the testing site - had no matches there right after his kit was processed - I discovered it by uploading his results to that secondary site to make discoveries. In my experience, I needed a

mitoYDNA, THE new Y-DNA and mtDNA Database mitoYDNA , THE new Y-DNA and mtDNA Database is here. What is mitoYDNA? How can it help the genealogy community? And many more questions, answered. What is a Y-DNA and mitochondrial DNA database and why do we need it? Y-DNA  – is the DNA for males that follows the patrilineal line back, father to son, for a very long time – thousands of years. mitochondrial DNA (mtDNA)  – is the DNA that follows the matrilineal line back, mother to her children, which is passed on by only her female children to their children, for a very long time – thousands of years. For years anyone who tested their Y-DNA and mtDNA could post their results to the databases YSearch and MitoSearch to do comparisons, matching and analysis. If you had a Y-DNA or a mtDNA test you could compare and match with people from various DNA testing companies. GDPR ( General Data Protection Regulation ) caused FTDNA to make the decision to close these two databases – time and money to get